The Grand Wash Trail is an excellent place to see many of the interesting features of the Navajo Sandstone.  This hike follows a narrow canyon between Scenic Dr. and Hwy 24, for 2.5 relatively flat miles. 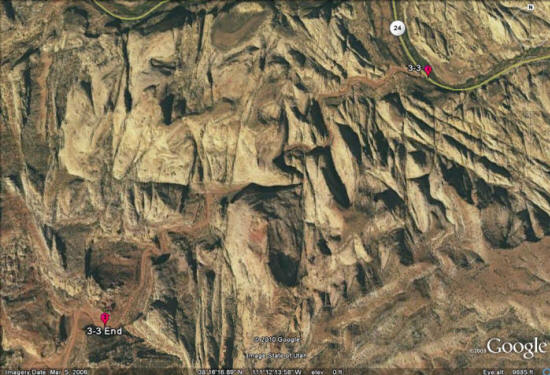 Figures 1-2: Because you can get so close to the preserved dune deposits in Grand Wash, it is an excellent place to see some of the structures of the dunes.  In this case it is possible to how deposits on the lee side of the dune decrease in slope as they come down to the toe of the dune, becoming tangential to the underlying flat surface.  This flat surface that the dunes toe out into is called a bounding surface, and it separates packages of dune sediments that were deposited at the same time.  Bounding surface are classified into one of several orders depending on how extensive they are, the extent of the surface being an indicator of how wide spread the change in deposition was.  Because we did not trace this surface out to see how far it extends it is impossible to tell which order it is.  A solid black line in the second picture indicates this bounding surface.

There is another type of bounding surface see in this picture.  It is called a reactivation surface, and indicates when a previously active dune face became active again following a period of inactivity.  The period of inactivity between the two periods when the surface was active shows up due to differential erosion.  This surface may only have been inactive for as short as a few months as a result of seasonal variations in wind direction.  The dashed black line in the second picture indicates this reactivations surface.