This mine has 2 gatedadits (tunnel entrances) into the sandstone.  The mine tunnel extends 108 ft long and 6.5 by 8 ft. and is currently home to the native bat population. The earliest mine claim was filed in 1901, and was of great interest because at the time was radium was worth $80,000 per gram. Uranium was not as valued yet because its industrial use was for colorant in glass and ceramic glazes, analytical reagents, and to tone photographs a red-brown color (Russell, 2008).

Within the Chinle Formation, uranium occurs within in the lower portions in the Shinarump Conglomerate, a fluvial (river) unit. The uranium is concentrated along large elongate scours or channels within the rock formation that are cut into the underlying Moenkopi Formation. Uranium often replaces fossil material and will preferentially replace cell walls. Uraninite (a uranium oxide UO2) will replace wood cell by cell in a selective fashion so the cellular structure of the plant material is preserved perfectly (Rosenweig, 1954).

During the Late Triassic, the supercontinent Pangaea was symmetrically straddling the equator and Utah was located around a paleolatitude of 10° north and was continuing to shift northward entering a more subtropical zone. The Chinle Formation as a whole is a series of fluvial-lacustrine system with a tropical monsoonal climate. Meaning the region would receive a good amount of precipitation but would be interrupted by seasonally dry periods.  (Dubiel et al. 1991, and Dubiel 1994) Tectonically, the Chinle was deposited in a continental back-arc basin on the west coast of Pangea. 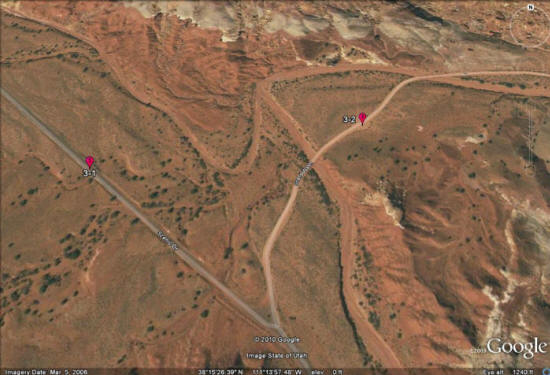