Erosion of the rock in the shape of a Chimney

The Moenkopi Formation exhibits marginal marine to continental alluvial fans deposits and also includes deltaic, shoreline, mudflat, tidal, estuarine, sabkha (supratidal setting on arid an coastline), fluvial (river), and some minor eolian (carried by wind) deposits. The majority of the Moenkopi at this locality is largely tidal flat and floodplain. The Chinle depositional environments are fluvial and some lacustrine (lake). The Shinarump Member here is a tabular,  planar-stratified, fluvial sandstone. The Shinarump has an irregular distribution and may be thick in some areas where it filled in paleovalleys, although elsewhere it can be much thinner to non-existent.

During the Late Triassic, the supercontinent Pangaea was symmetrically straddling the equator and Utah was located around a paleolatitude of 10° north and was continuing to shift northward entering a more subtropical zone (Dubiel et al. 1991, Dubiel 1994). The Chinle Formation as a whole is a series of fluvial-lacustrine system with a tropical monsoonal climate. This region would receive a good amount of precipitation but would be interrupted by seasonally dry periods.  (Dubiel et al., 1991.) Tectonically, the Chinle was deposited in a continental back-arc basin on the west coast of Pangea. 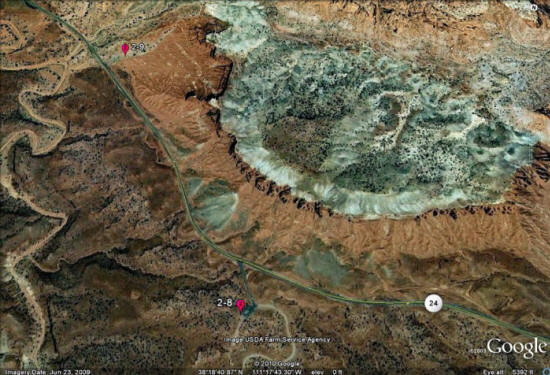