In the Moenkopi Formation, many varieties of ripples along bedding planes and in cross-sectional view are present in loose rock slabs around the Twin rocks. Above the contact of the Moenkopi , mud rip -up clasts are common in the base of the Shinarump channel sandstones.

The Moenkopi Formation regionally preserves environments of shallow marine to continental alluvial fans and also includes marginal marine, deltaic, shoreline, mudflat, tidal, estuarine, sabkha (arid supratidal - above tide level), fluvial (river), and eolian (wind blown) deposits (Dubield 1994).  In this locality, the deposits are largely thin-bedded tidal and floodplain deposits.  The Chinle depositional environments are typically fluvial. The Shinarump Member here is a tabular planar stratified sandstone with an irregular distribution that may be thick in some areas where it filled in paleovalleys.

During the Late Triassic, the supercontinent Pangaea was symmetrically straddling the equator and Utah was located around a paleolatitude of 10° north and was continuing to shift northward entering a more subtropical zone. The Chinle Formation as a whole is a fluvial-lacustrine system with a tropical monsoonal climate. Meaning the region would receive a good amount of precipitation but would be interrupted by seasonally dry periods.  (Dubiel, 1991.) Tectonically, the Chinle was deposited in a continental back-arc basin on the west coast of Pangea. 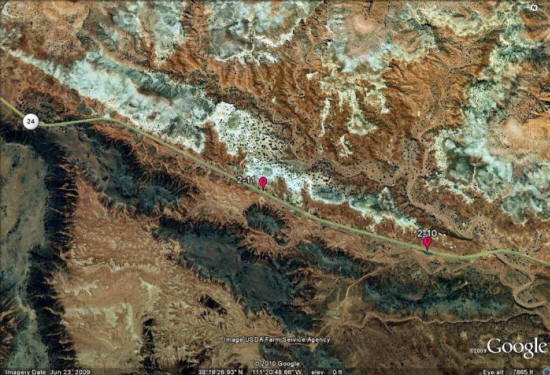