Capitol Reef National Park is situated on the edge of the Colorado Plateau; a physiogeographic province centered roughly on the Four Corners area of the western US. The Colorado Plateau is characterized by a nearly complete section of sedimentary rock units ranging in age from Late Permian (~275 Ma) to Early Tertiary (~60 Ma) (Smith et al., 1963; Billingsly et al., 1987; Morris et al., 2003). Uplift and erosion began ~70-50 Ma during the Laramide orogeny (mountain building event) that created the 100 mile long, N-S striking monocline known as the Waterpocket Fold (Mathis, 2000; Morris et al., 2003). Downcutting along the monocline has created canyons and exposed the sedimentary layers that tell the paleogeographic story of the western US during the Mesozoic era. Volcanics during the Middle Tertiary (~30-20 Ma) and again in the Late Tertiary (~6.4 Ma) covered the strata with basalt and remnant black boulders can be seen throughout the park (Delaney and Gartner, 1997; Mathis, 2000; Morris et al., 2003).

The purpose of this website is to document sedimentary structures (and other outcrop scale features) and interpret depositional environments of the rock formations in Capitol Reef and other nearby areas. We examine primary sedimentary structures such as bedding, trace fossils and soft sediment deformation. Secondary (diagenetic) features are also identified such as iron and uranium precipitation by groundwaters with different chemistries. Geomorphic and weathering features like hoodoos and honeycomb weathering patterns are also highlighted. 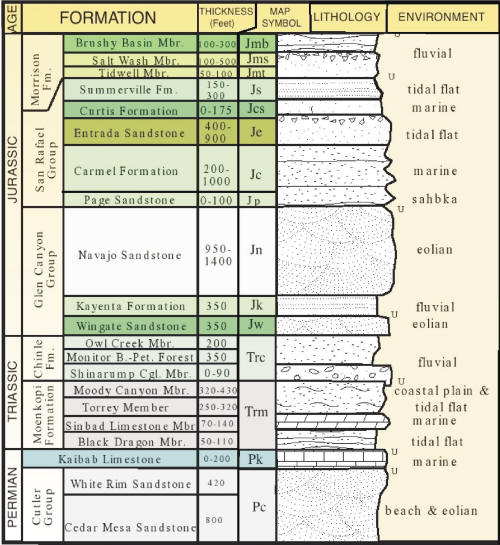